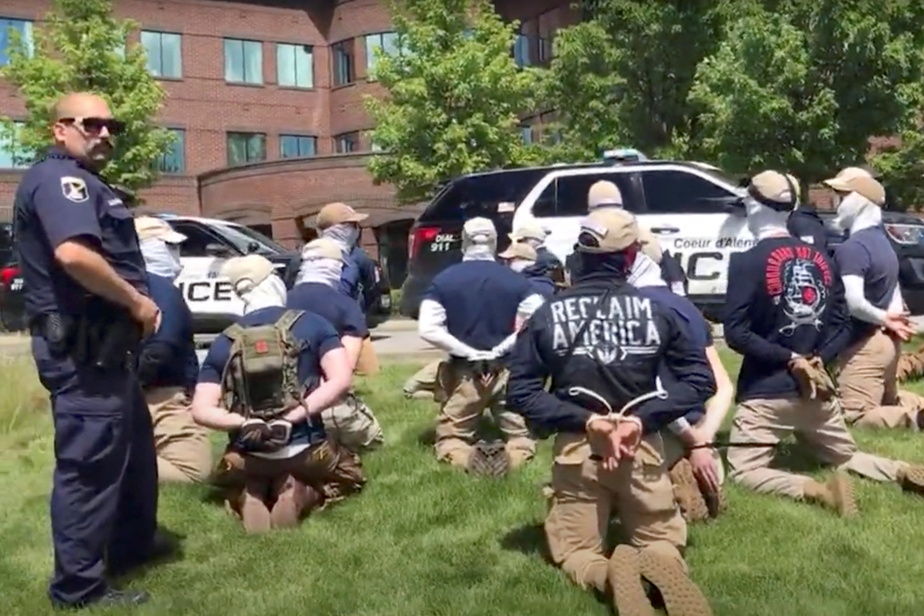 Dozens of masked men who are members of a white supremacist group were arrested last week near an LGBTQ+ pride demonstration in Coeur d’Alene, Idaho. “These groups are more ready to use violence,” notes an expert.

On June 10, 31 masked members of a far-right group were arrested in Coeur d’Alene, Idaho. According to local police, the members from 11 states had converged on a single hotel and were getting into the bed of a U-Haul truck when they were spotted by a citizen who called 911.” Based on the equipment the individuals had and the documents that were seized from them, it is obvious to us that they had come to riot downtown,” the police chief said. of Coeur d’Alene, Lee White, at a press conference. The riot coincided with the LGBTQ+ pride parade taking place that day in the city of 50,000.

Riot averted at the last minute

The individuals were members of Patriot Front, a white supremacist group involved in the deadly 2017 riot in Charlottesville, Virginia. In interview with The Press, Amy Cooter, sociologist and specialist in American militias, notes that these arrests which occurred in broad daylight are not surprising. “Groups like the Patriot Front, which have white nationalist and neo-Nazi elements, see LGBTQ+ pride and other minority groups as ‘threats’ to straight white Americans, and their goal is to use violence to try to ‘ correct” the situation. »

Mme Cooter notes that LGBTQ+ communities have long been persecuted, including being targeted during the Holocaust. “So it’s not new, but there is a renewed effort to target these groups using social media to coordinate. In their discussions, white supremacists use fear to legitimize violent reactions against marginalized groups. This is in line with what we had anticipated for quite some time: there have been other such arrests over the past year and a half in the United States, and I don’t expect that to stop in a near future. »

Why did militants target Idaho? Many observers link the event to new laws targeting trans children and restricting access to abortion recently passed in the state, noted Mike Satz, director of the Idaho 97 Project, a group that campaigns against the extremism. “Idaho leaders aren’t doing enough to make sure a group like Patriot Front doesn’t feel welcome here. In fact, some of our leaders seem to encourage these groups through their statements, conduct and associations. Our civil, political, business and religious leaders must condemn the hatred we see spreading in our state,” he said in a statement.

The marginalization of people from LGBTQ+ communities and the adoption of other far-right positions are increasingly on full display in the American political sphere. This week, the Republican Party of Texas officially adopted a platform in which homosexuality is labeled an “abnormal life choice” and a rejection of protections offered to trans or gay people. According to the non-governmental organization Anti-Defamation League, incidents of bullying and harassment are on the rise this month, LGBTQ+ pride month.

Amy Cooter notes that misdemeanor charges have been filed against all 31 members of the Patriot Front group, which does nothing to deter other activists from attempting the same. “Maybe other charges will be filed, but if all you do is impose a fine on them, it’s not a deterrent,” she explains. Many extremists online make jokes about it and say they have nothing to lose because the consequences are minimal, so taking this kind of action is worth it. And this is true even in cases where the objective of violence is not achieved, because it gives them importance, visibility, and people know that they exist. We see that these groups are much better organized and more ready to use violence. »